11 Common Mistakes in a Capital Campaign

Once your church decides to commit to a capital campaign, the last thing you want is to unintentionally make any moves that could end up being detrimental to your campaign. Over the past 25 years, we’ve worked with more than 3100 churches and have seen some patterns repeated that end up limiting the results of some of those campaigns.  Here are the 11 most common mistakes our strategists have seen:

11) Waiting too long to prepare for the campaign. A capital campaign represents far more than raising money.  An effective campaign begins several months in advance on many fronts, and a successful campaign takes months to prepare and execute, not weeks.

10) Using old templates and models of previous campaigns.  So much change has come into the church, our culture, and the thoughts of givers in the past decade—and even past few years—that the traditional giving models of the past few decades might not be the best options anymore.  Churches tend to default to what is known rather than considering innovations that better match the current church.  It can be much more effective to match a giving campaign to the climate of what is currently happening.

9) Lack of teaching about giving. Successful campaigns happen when the biblical value of giving is consistently taught, modeled, and celebrated over time.  The most fruitful campaigns are a result of healthy, creative, and practical preaching on finances and living in light of eternity months and even years in advance of a campaign.

8) Lack of attention to general giving systems and best practices.  The premise of a classic campaign is that the campaign giving should be above and beyond normal tithes and offerings.  Since most people neither tithe nor give meaningfully, it is highly unlikely that they will give to a campaign.  A church that is intentional in building giving systems that make giving easier will see greater success in a campaign from relevant methods of giving.

7) Misunderstanding the role of major gifts.  Churches don’t just have one kind of giver, and one type of imperative giver is the surplus giver.  This person may or may not be currently giving to your church, but it is someone who can and will decide to give at a higher level than most givers. While it can seem difficult to spiritually engage in conversation with the major givers, there is a way to suitably have conversation around major gifts.

6) Not incorporating existing ministry platforms. Most churches have smaller sections of ministry that could be strongly implemented into the giving campaign.  Empowering small groups, sections of ministry (such as women’s ministry or life groups) to engage with the current campaign can creatively and organically change the outcome of the campaign.

5) A project that doesn’t make sense.  Before asking the congregation to commit, it’s important to allow them to feel they have ownership in the project.  If not enough information is presented, the project can seem too expensive or unwise for potential givers to make a commitment. A successful church knows how to reveal the project and build momentum.

4) Not knowing your giving data and trends.  Basing a campaign on merely a quick look of church giving patterns may not be accurate enough to predict what your campaign could realistically raise.  In order to avoid setting up your campaign for failure before even beginning, it’s necessary to have an in-depth review of your giving.

3) Assuming too much of your givers.  Although church leaders often take plenty of time to work through the details of a giving project, that careful planning doesn’t always transfer over into a captivated audience.  In order to achieve the best giving results, it takes time to teach and build momentum well in advance to gain buy-in from potential givers.

2)  Underestimating the mind and hearts of givers.  Gone are the days when people would give to the church out of loyalty or lack of other options. With multiple choices of meaningful projects of which to be a part, givers may not just automatically join a giving campaign at their church.

1) Believing a campaign is solely about fundraising, not discipleship.  Approaching a campaign with raising money as the sole purpose can produce positive results. However, we have seen that campaigns that disciple givers to be good stewards and lifelong givers not only have more success overall, they also have the added benefit of changing people’s perspectives.

Being aware of these potential pitfalls can go a long way in contributing to the success of your campaign.  These examples are taken from our larger, more in-depth e-book called The Ultimate Church Capital Campaign Guide. 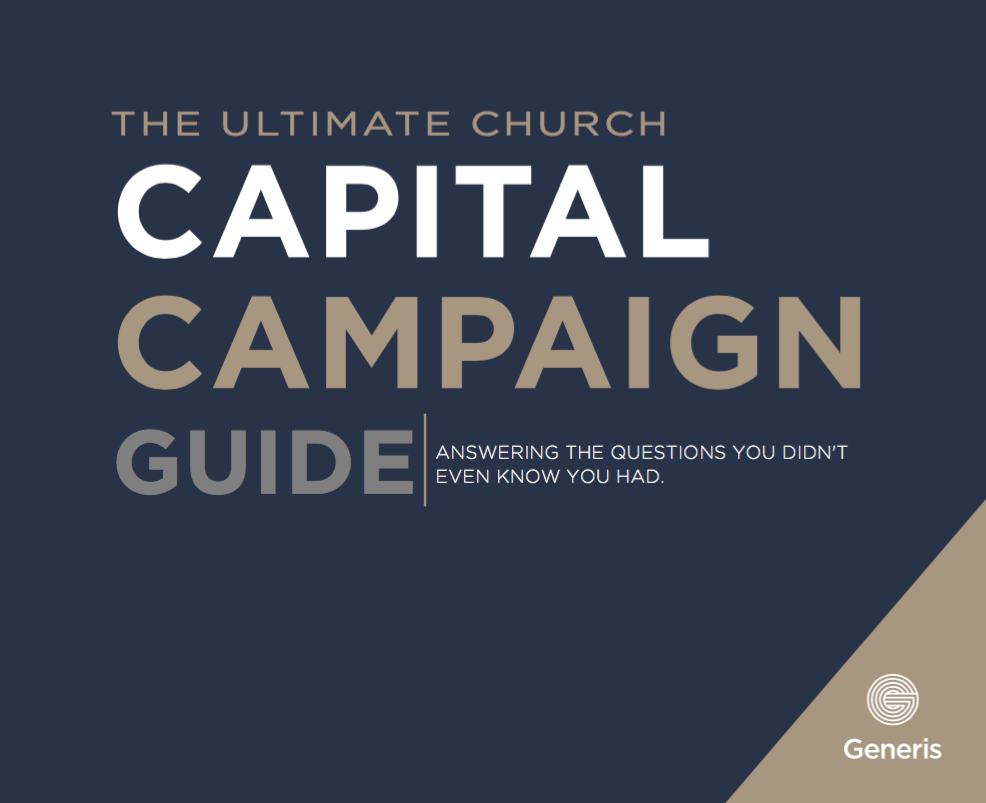 This post was written by Erik Ely, Generosity Strategist at Generis. If your church is looking for assistance in its generosity strategy from beginning to end, we here at Catalyst highly recommend you stop whatever you’re doing and look to Generis for help. They are the ones with the critical insight and the answers you need to take your next right step.